HomeBank CapitalCredit Suisse to raise $1.9bn of capital as it reels from Archegos...
Bank Capital

Credit Suisse to raise $1.9bn of capital as it reels from Archegos losses

Credit Suisse is raising SFr1.7bn ($1.9bn) of capital from investors in a bid to rebuild its balance sheet as it reels from back-to-back crises involving Archegos Capital and Greensill Capital that have triggered investigations by the Swiss financial regulator.

The Swiss lender said on Thursday it would sell 203m convertible notes to existing shareholders as it seeks to lift its common equity tier 1 ratio from 12.2 per cent to 13 per cent.

Credit Suisse has been rocked by its biggest trading loss in more than a decade from family office Archegos, which came just weeks after it was forced to suspend $10bn of supply chain finance funds linked to Greensill.

Separately, Finma, Switzerland’s financial regulator, announced on Thursday it had opened enforcement proceedings against Credit Suisse in relation to potential risk management shortcomings in its relationship with Archegos.

The regulator had previously started an investigation into Credit Suisse’s Greensill losses.

“As a result of these two cases, Finma has in recent weeks ordered various short-term measures to be put in place,” the watchdog said. “These include organisational and risk-reducing measures and capital surcharges as well as reductions in or suspensions of variable remuneration components. These precautionary and temporary measures are intended to complement and reinforce steps already taken by the bank.”

The move came as Switzerland’s second-biggest bank by assets reported a SFr757m loss in the first quarter, having previously warned that pre-tax losses could be as high as SFr900m.

The bank would have reported its best quarter for at least a decade thanks to a 31 per cent year-on-year rise in revenues, but it was forced to write off SFr4.4bn on losses related to Archegos.

“The loss we report this quarter, because of this matter, is unacceptable,” said Thomas Gottstein, chief executive of Credit Suisse. “Together with the board of directors, we have taken significant steps to address this situation as well as the supply chain finance funds matter.”

Credit Suisse said it had sold 97 per cent of the shares it held relating to Archegos and anticipated a further $655m of losses on the sales in the second quarter.

It added it was also reducing the size of its prime brokerage, which was at the centre of the Archegos debacle, and cutting its investment bank leverage exposure by at least £35bn. 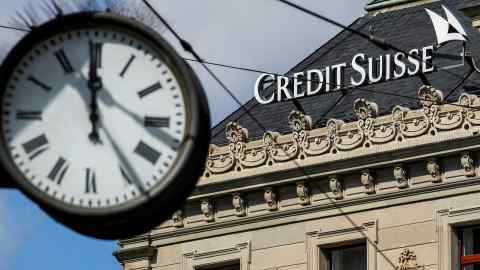 The bank also said it was taking a $30m charge on the $140m bridging loan it extended to Greensill last November, having been repaid $50m by the administrators for the failed supply chain finance firm. The Financial Times has reported risk managers were overruled by senior executives on the loan, having raised red flags on Greensill.

“A capital increase will alleviate immediate concerns around the soundness of the capital position,” said Andreas Venditti, an analyst at Vontobel. “However, Credit Suisse’s…