SEOUL — Samsung Electronics’ semiconductor business, the engine that has powered the company’s high profitability, is coming under growing pressure. In the latest fiscal quarter, the company was overtaken by rival Micron Technology in terms of operating profit margin for the sector, with the former posting 18% and the latter reaching 20%. A drop in the profitability of the company’s cash cow could also affect its investment capacity in other sectors, such as semiconductor contract manufacturing and displays.

The decline in the semiconductor operation’s profitability in the period from January to March stems largely from a plant shutdown in Texas after cold weather caused power outages in mid-February, and the opportunity loss during this period led to a drop in earnings.

But factory shutdowns are not the only reason for the drop in profits. The competitiveness of the company’s semiconductor memory unit, which boasts sales of about $49 billion and a 40% share of the global market, is slowly declining.

U.S.-based Micron is challenging Samsung’s dominance. Micron is catching up with Samsung in mass-production technology for cutting-edge DRAM with a circuit line width of 15 nanometers (a nanometer is one-billionth of a meter), and it has begun mass production of advanced 176-layer NAND flash memory, in which the memory elements are stacked vertically, ahead of Samsung.

In a conference call announcing the company’s earnings for the period from December 2020 to February 2021, Micron CEO Sanjay Mehrotra said that the mass production of industry-leading, cutting-edge products is moving forward as planned, and that they will become the company’s main products in 2022. Micron’s rapid progress is thought to be supported by engineers scouted from outside the company. Micron is hiring a large number of Japanese and South Korean engineers from Toshiba, SK Hynix and Samsung, and using them to develop its production technology at its facilities in the U.S. and Japan, according to semiconductor industry insiders.

Micron acquired Elpida Memory, formerly based in Tokyo, and it has many advanced DRAM engineers in Japan. By developing its mass-production technology in Japan, Silicon Valley and Idaho — home of the company headquarters — Micron has accumulated the technological capability to compete with Samsung.

Samsung Vice President Han Jin-man, asked in an April 29 telephone conference about the strong performance of Samsung’s competitors, said, “We have the industry’s highest ratio of 15-nanometer DRAM, and we will continue to lead the industry by starting full-scale mass production of 14 nanometers in the second half of this period.”

Samsung was the largest player in the 2020 DRAM market, with a 41.7% share, according to U.K.-based Omdia. It was trailed by SK Hynix with 29.4% and Micron with 23.5%. The oligopolistic structure of the market means all three companies have earned high profits. During the boom period known as the “supercycle” in 2018, all three companies achieved an astonishing operating profit margin of over 50%.

Behind this high profitability was the investment adjustment strategy used by “King Samsung.” When prices began to slacken, Samsung would adjust its capital investment to keep supply and demand in balance. It was a technique that only Samsung, with its monopoly on cutting-edge products and overwhelming market share, could pull off. However, if Micron’s improved technology leads to a battle for market share, the market for DRAM — more stable than that for NAND — could grow unstable. 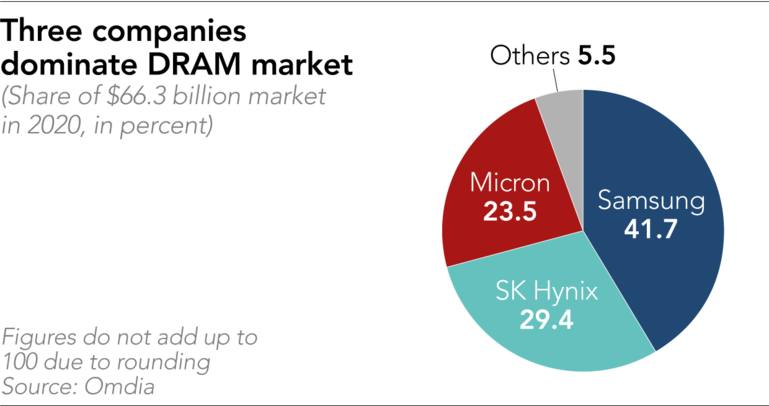 For Samsung, the semiconductor memory business, which has continued to account for the majority of its operating income, has been a profit source that generates funds for investment in other businesses.

Samsung is investing more in its growing foundry sector, which is currently locked in competition with Taiwan Semiconductor Manufacturing Co., and its capital investment and spending on research and development in the display and smartphone businesses are also on the rise. Now that Vice Chairman Lee Jae-yong has been imprisoned, Samsung’s “winning pattern,” which has seen the company grow through investment led by the top management, may be breaking down.

But Samsung’s semiconductor business still has a profit margin of 18% — high for a manufacturing company. The business also handles system semiconductors, which require large upfront investments. Still, many see Micron’s higher margin as a sign that Samsung is losing its competitive edge. The technology gap between the two companies will be increasingly important in assessing Samsung’s competitiveness and the future of the memory industry.

3 Reasons You Should Never Time the Stock Market

Market Optimism Is Justified by Covid Fight. Prices, Not So Much

Inflation is seen as the stock market’s boogeyman as the economy recovers. We…

Kass: Here’s Why This Market Is a Trading Sardine

TSMC (TSM) Dips More Than Broader Markets: What You Should Know

Bank of America (BAC) Gains As Market Dips: What You Should Know