Building the ‘Intelligent Bank’ of the Future

The status quo in retail banking is tottering. It’s under siege from new technologies, new consumer expectations, new competitors and new regulations. This has forced banks and credit unions to modify their business models, re-prioritize investments, change products and services offered and ramp up innovation efforts. There has also been a rethinking of distribution options, with digital channels significantly increasing in importance.

These shifts are reflected in the sixth iteration of a study of the future of retail banking conducted by The Economist Intelligence Unit, on behalf of Temenos. Until recently, the changes in consumer behavior were believed to be the primary impetus for changes in retail banking strategies. For the first time, the key driver for change is considered to be new technologies, such as artificial intelligence, machine learning, blockchain, the Internet of Things and other technologies underpinned by data and advanced analytics. And the forecast from those surveyed is that the importance of new technologies will only get greater in the future (2020 to 2025). This is reinforced by the importance of regulations on data technology – which is also projected to increase in the longer view. 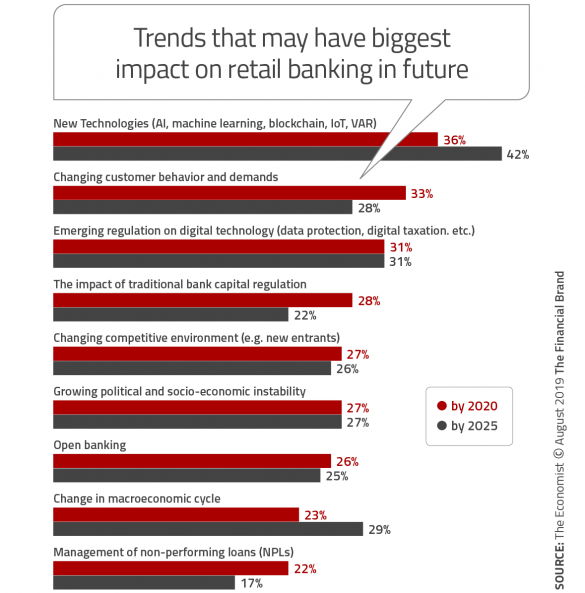 When financial institutions were asked about the impact of areas of banking that are the most vulnerable to outside competition, it was not surprising that payments was ranked at the top, followed by savings/deposits and lending/leasing. We are already seeing the impact of targeted solutions on the foundation of traditional banking in these areas. Aligned with these findings, the non-traditional competitors thought to be the biggest threats in the short-term (2020) were payment players (39%), big tech firms (29%) and peer-to-peer lenders (23%). In the longer term, the biggest threats were considered to be the big tech firms (27%), partnerships between big tech and fintech (26%) and payments players (25%). 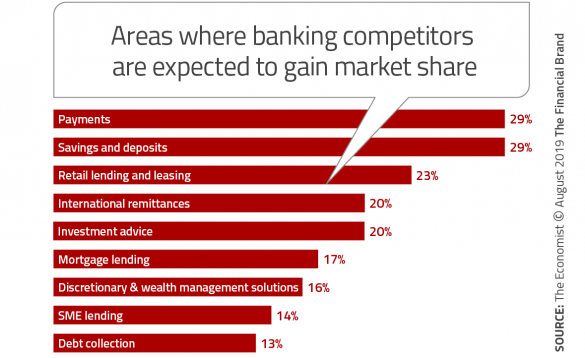 Interestingly, neobanks (Starling, N26, Monzo, etc.) were seen as an increasing threat in the longer term, indicating that many bankers are noticing the increase in scale these firms are achieving. The increase in competitive presence of neobanks was not seen as being as much of a threat in North America as in the rest of the world, possibly reflecting the more difficult regulatory environment in the U.S.

Similar to the changes expected in the drivers of change and the competitive landscape, financial institutions also see the strategic priorities changing over the next five years. In 2020, banks and credit unions expect the key strategic priorities to be product agility (32%), digital marketing (31%), digital channel migration (29%) and cutting costs (28%), while the priorities in 2025 are…

Read More: Building the ‘Intelligent Bank’ of the Future