Deutsche Bank’s chief financial officer has warned that coronavirus has left it racing to speed up redundancies to achieve a key pledge on job cuts, but said it remained on track to hit its financial targets this year despite the disruption.

Speaking on the first anniversary of the German lender’s historic strategic overhaul, James von Moltke acknowledged that the economic fallout from Covid-19 had made turnround at Deutsche more difficult but was defiant on the troubled lender’s progress.

“Our core strategic decisions have been vindicated, we have delivered on all of our promises . . . [and are] on track to deliver on the targets that we set for 2020,” he said in an interview.

“The corona crisis means we did delay some parts of the restructuring over the course of about six weeks, which was just a hiatus,” said Mr von Moltke. “The glide path is something like a thousand heads a quarter.”

He said that while “I can’t tell you as I sit here today if we can compensate for the slowdown” in the second half of this year, he promised the bank would meet its ultimate target by the end of 2022.

Last July, after abandoning a merger with Commerzbank, Deutsche unveiled a three-year plan that mapped out a dramatic retreat from investment banking, set up a €288bn “bad bank”, and promised 18,000 job cuts and €5.8bn in cost reductions.

The bank has internally committed to removing 4,000 staff from the payroll this year to help trim €2bn from expenses.

It eliminated about 1,000 positions in the first three months of 2020 — through a combination of normal departures and redundancies — but the rate “plateaued” in the second quarter, Mr von Moltke said.

The finance chief, who joined from Citigroup in July 2017, has been a key figure in the revival of Deutsche, which is trying to rebound from an ill-advised attempt to crack the US market.

The lender has not made an annual profit in five years, racking up €14bn in cumulative losses over that period. Mr von Moltke said two years ago that Deutsche was stuck in a “vicious circle of declining revenues, sticky expenses, lowered rating and rising funding costs”.

Deutsche has “clearly turned a corner” since then, said Mr von Moltke, but executives were “not taking a lot of victory laps” yet. 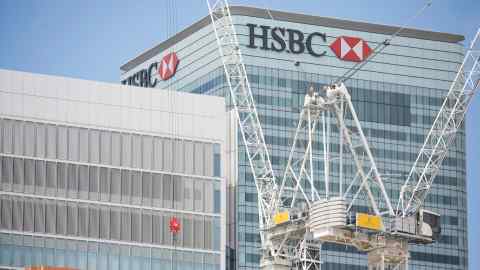 Since hitting a low in mid-March, the bank’s shares have risen 75 per cent, far outstripping the 17 per cent gain in the benchmark index of European bank stocks. Funding costs have fallen, its capital buffer has been repaired and it has benefited from a surge in fixed-income trading revenue in volatile markets.

“It took a year longer than any of us hoped to stabilise the company, execute on these plans and enter a period of momentum,” said Mr von Moltke. While now the bank is in a position to enter a virtuous…