When a small-town, East Texas bank caught fire the day before state inspectors were to examine the books, few thought it was a coincidence.

The May 2019 fire at Enloe State Bank in Cooper was started in the bank’s board room. Someone had stacked files on a conference table and set it ablaze, court records show. On Friday, Anita Gail Moody, 57, the bank’s former president who had worked there since she was a teenager, pleaded guilty in Sherman to conspiracy to commit bank fraud and arson for her actions, federal authorities said.

Moody held the top job for more than 10 years. Since 2012, she had been stealing from the bank by creating more than 100 fake loans in the names of actual bank customers and others, according to the U.S. attorney for the Eastern District of Texas. The fraud totaled about $11 million, officials said.

Moody has agreed to a sentence of seven years in federal prison and to pay $11.1 million in restitution, the U.S. attorney’s office said. A sentencing date will be scheduled. Her attorney declined on Monday to comment.

“Moody eventually admitted to setting the fire in the boardroom to cover up the criminal activity concerning the false loans,” the U.S. attorney’s office said in a statement. 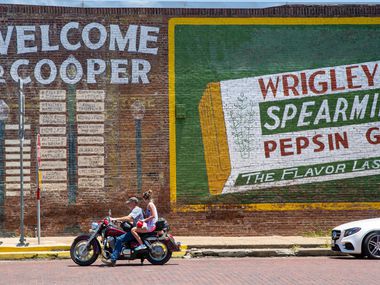 In addition to spending the stolen money on her “lifestyle,” she also admitted to using it for her boyfriend’s business as well as the businesses of friends, authorities said.

“Anita Moody and her close friends and family members personally benefited from these fraudulent loans,” the plea documents said.

The fire and subsequent investigation shook the town of about 2,000 residents — in a county where cattle outnumber people 4-to-1.

Before the month ended, the Texas Department of Banking had closed the bank, citing “insider abuse and fraud by former officers.” It was Texas’ first bank failure since 2013.

Some residents of the agricultural community about 80 miles northeast of Dallas were surprised to learn that they had loans at the bank for which they had never applied.

Noel Bailey, the bank’s president more than 30 years ago, told The Dallas Morning News last summer that the scandal “hurt a lot of people” in the town.

The Federal Deposit Insurance Corporation, the Depression-era government agency set up to protect people who put their money in banks, estimated at the time that it would have to cover $27 million of the bank’s $36.7 million in assets.

The Texas Department of Banking had set for a review of the bank the day after the fire, authorities said. The agency had specifically requested a set of financial records…

People Aren’t Visiting Branches. Banks Are Wondering How Many They Actually Need.

“We’re all in this together”: Food bank teams up with online marketplace to provide

Continued bursts in the number of coronavirus cases across the country in states like Florida, Texas and California bring...

"We're all in this together": Food bank teams up with online marketplace to provide

The New Normal After The Covid-19 Crisis