That means the bank will have to hold billions of dollars more in regulatory capital to cover unexpected loan losses. While the move might be prudent considering the times ahead, it doesn’t bode as well for JPMorgan’s stock because regulatory capital cannot generate any kind of return for the bank. Additionally, this new requirement could make maintaining the dividend more of a challenge for JPMorgan down the line. How did this happen?

The Federal Reserve last week released the results from its annual stress tests. During this exercise, the Fed put the 33 largest banks with more than $100 billion in assets through a series of hypothetical scenarios. Essentially, the Fed projects how a bank’s balance sheet might perform if GDP were to contract by, say, 13% over a specific time period, and unemployment were to rise to maybe 10%. The goal is to make sure banks have enough capital to continue lending if their profits shrink and loan losses rise substantially.

These tests aren’t just important for the global economy, but they also determine how much capital a bank is required to hold. The tests showed that JPMorgan could sustain healthy capital and continue to pay its normal dividend during the most adverse scenarios the Fed put banks through. But the results also required JPMorgan to maintain a higher CET1 capital ratio.

A closely watched metric by regulators, the CET1 ratio measures the base level of capital a bank needs to maintain as a percentage of its risk-weighted assets. The idea is that even after a bank accounts for lots of unexpected loan losses, it still needs to be able to extend credit to people and businesses during a downturn. CET1 capital includes retained earnings, common stock surpluses, and accumulated other comprehensive income.

Here is how the CET1 ratio is set up: 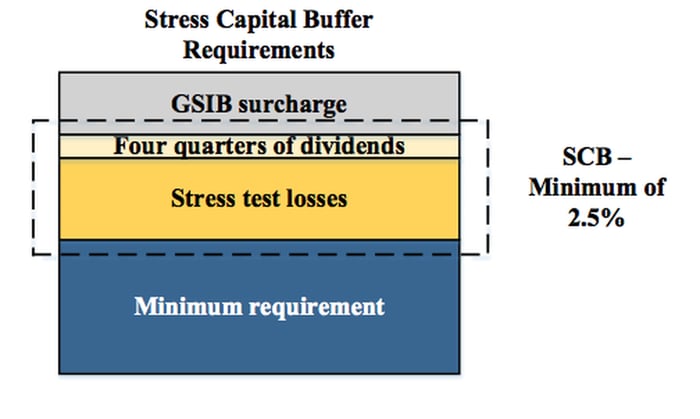 The Fed should clarify how banks can deploy capital and liquidity

The Federal Reserve has taken a number of recent actions to support the flow of credit to households and...

The novel coronavirus pandemic and the credit loss accounting standard are leading to lower regulatory capital ratios at global...

Breaking News This Morning … HSBC office evacuated “HSBC has evacuated dozens of staff from its office in London’s...

MUMBAI: Veteran banker Uday Kotak has said that around 40% of the banking sector’s capital base could get impacted...

Is bank capital the next frontier for ESG?

BBVA issued the first ever Green Additional Tier 1 (AT1) bond on July 7, and immediately sparked a spirited...

(Bloomberg) -- Banco Santander SA is facing a potential hit to its capital levels in the second quarter after...

To Improve a Bank’s Efficiency Ratio, Invest in Digital Technology – and Your

Black Business Owners Had a Harder Time Getting Federal Aid, a Study Finds