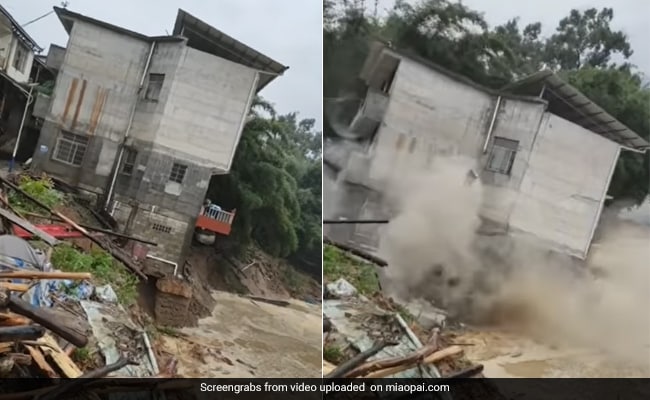 A shocking video shows a house collapsing into a river in China.

A three-storey building recently collapsed into a river in China amid severe flooding. A shocking video which captured the moment shows the residential building suddenly falling down and getting washed away by raging floodwater. According to the Shanghaiist, the incident occurred in the province of Guangxi, which, along with other parts of southern China, has experienced torrential rainfall and flooding over the last few days.

Footage of the shocking bofuilding collapse was captured by an onlooker and has gone viral on Chinese social media platforms. Luckily, nobody was injured in the incident as the house had been evacuated beforehand.

Take a look at the video below:

The terrifying incident took place at 9:30 am local time on Wednesday in the Rongshui county of Guangxi province.

Local officials said that the building’s foundation had been damaged by floodwater, which led to its collapse. In a statement, authorities said that water level in the Beijiang River Basin had increased after heavy and continuous rainfall over the last few days.

On Tuesday, a risk assessment team found that the building’s foundation had safety risks. Six people living in the building were then evacuated to safety, along with other local residents.

Local government is now carrying out post-disaster relief work in the area.

According to Daily Mail, more than two million have been affected by deadly floods in southern and eastern China, with Guangxi province being among the worst-hit by the natural disaster. Nearly 1.5 lakh people have been evacuated from their homes due to severe flooding.

Rising markets and inequality grow from the same root

Officers raided the site at Wouwse Plantage on the Dutch-Belgian border on June 22, arresting six men suspected of...

Written by Jacqui Palumbo, CNNOver Independence Day Weekend, 80 artists asked Americans to look up at the skies. Throughout...

The results are seen as a crushing defeat for the Restart Coalition, a left-leaning political alliance led by the...

President Trump’s reelection campaign is taking a victory lap with the implementation of the United States-Mexico-Canada Agreement trade deal...

More than two months after the first peak affected just a handful of states, the virus is cresting again...

What is a tax credit? Definition and how it’s calculated

What is a tax credit? Definition and how it’s calculated

What Are Fintechs and How Can They Help Small Business?