Why Fintech Challengers May Not Conquer Banking After All

Fintech challenger banks expected their own version of Julius Caesar’s famous line: “I came, I saw, I conquered.” The challengers have certainly enjoyed some notable successes, but they remain far short of conquest, and questions are beginning to arise among knowledgeable observers about whether the would-be conquerors are quite as formidable as predicted.

Alan McIntyre, Senior Managing Director – Banking for Accenture, is among the skeptics. In an exclusive interview with The Financial Brand the consultant stated, “I struggle to see how the valuations of some of the pure, narrow challenger bank models are justified at the moment given what we know of the economics.”

That may seem like a bit of good news for the thousands of traditional financial institutions nervously glancing over their shoulders at the oncoming invaders. Some observers go so far as to predict a renaissance of legacy banks and credit unions. McIntyre doesn’t go that far. The widely followed thought leader sees a continued squeeze on legacy financial institutions — smaller institutions in particular — from trends hitting both sides of the balance sheet. 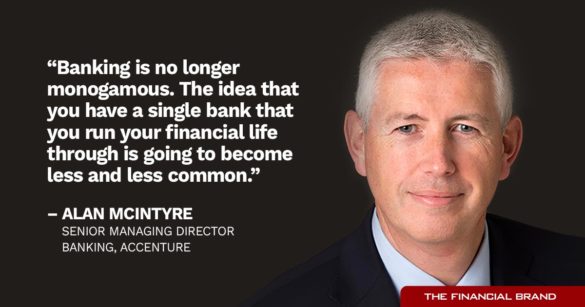 Or will it be the largest U.S. banks, who have been cutting deals with the big techs and fintechs and investing gazillions in digital capabilities?

Can anyone else but some combination of these giants expect to survive long term? Yes, says McIntyre, but certainly not all current institutions.

In the following report based on a lengthy interview, the consultant outlines several strategies for not only legacy banks and credit unions, but challenger banks as well. McIntyre also predicts what’s next for big tech involvement in banking and describes the growing impact of open banking.

You’ve spoken of the “twilight of community banking.” That’s a sweeping statement. How do you back it up?

Alan McIntyre: Both sides of their balance sheet clearly are under threat. On the liability side, a key aspect of traditional institutions’ business model is having physical locations that attract deposits like flypaper. But the relationship between a physical network and share of deposits has basically broken down. Simply having a branch on the corner no longer attracts the same level of deposits it used to. That’s why you see some of these smaller institutions get more into brokered deposits — essentially taking deposits where they can find them.

On the asset side of the balance sheet, one of the reasons I have an existential concern for small financial…

Read More: Why Fintech Challengers May Not Conquer Banking After All

Fed stands behind U.S. banking sector no matter what the coronavirus demands,

What Is a Credit-Builder Loan?

What Is a Credit-Builder Loan?